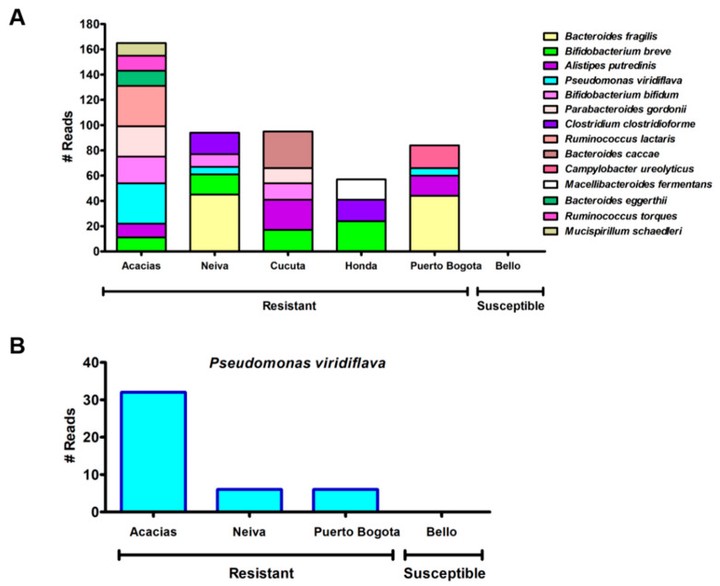 Insecticide resistance in Aedes aegypti populations is a problem that hinders vector control and dengue prevention programs. In this study, we determined the susceptibility of Ae. aegypti populations from six Colombian regions to the pyrethroid lambda-cyhalothrin and evaluated the presence of the V1016I mutation in the sodium channel gene, which has been broadly involved in the resistance to this insecticide. The diversity of the gut microbiota of these mosquito populations was also analyzed. Only mosquitoes from Bello were susceptible to lambda-cyhalothrin and presented a lower allelic frequency of the V1016I mutation. Remarkably, there was not an important change in allelic frequencies among populations with different resistance ratios, indicating that other factors or mechanisms contributed to the resistant phenotype. Treatment of mosquitoes with antibiotics led us to hypothesize that the intestinal microbiota could contribute to the resistance to lambda-cyhalothrin. Beta diversity analysis showed significant differences in the species of bacteria present between susceptible and resistant populations. We identified 14 OTUs of bacteria that were unique in resistant mosquitoes. We propose that kdr mutations are important in the development of resistance to lambda-cyhalothrin at low insecticide concentrations but insect symbionts could play an essential role in the metabolization of pyrethroid insecticides at higher concentrations, contributing to the resistant phenotype in Ae. aegypti.