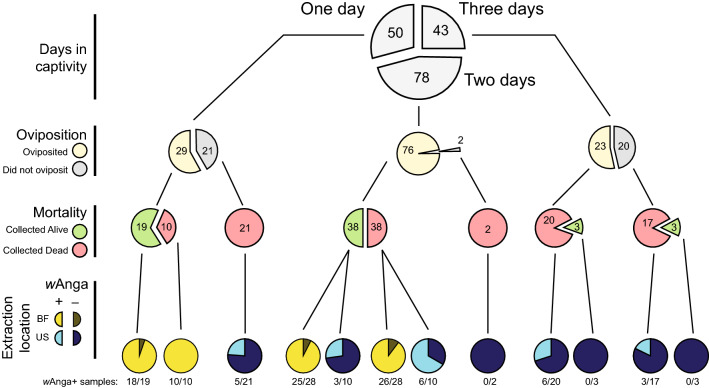 Wolbachia, an endosymbiotic alpha-proteobacterium commonly found in insects, can inhibit the transmission of human pathogens by mosquitoes. Biocontrol programs are underway using Aedes aegypti mosquitoes trans-infected with a non-natural Wolbachia strain to reduce dengue virus transmission. Less is known about the impact of Wolbachia on the biology and vectorial capacity of Anopheles mosquitoes, the vectors of malaria parasites. A naturally occurring strain of Wolbachia, wAnga, infects populations of the major malaria vectors Anopheles gambiae and Anopheles coluzzii in Burkina Faso. Previous studies found wAnga infection was negatively correlated with Plasmodium infection in the mosquito and wAnga influenced mosquito egg-laying behavior. Here, we investigate wAnga in natural populations of An. coluzzii and its interactions with other resident microbiota using targeted 16S sequencing. Though we find no major differences in microbiota composition associated with wAnga infection, we do find several taxa that correlate with the presence or absence of wAnga in female mosquitoes following oviposition, with the caveat that we could not rule out batch effects due to the unanticipated impact of wAnga on oviposition timing. These data suggest wAnga may influence or interact with the Anopheles microbiota, which may contribute to the impact of wAnga on Anopheles biology and vectorial capacity.