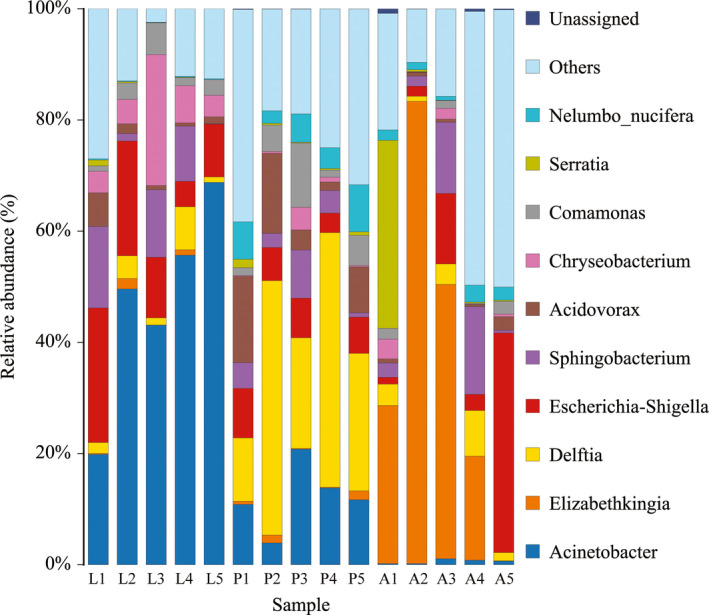 The microbiota plays an important role in the growth of mosquitoes and the transmission of mosquito-borne pathogens. The effects of changes in aquatic habitats in which mosquitoes live, as one of the major factors closely associated with the microbial communities of mosquitoes, on the microbiota of different developmental stages remain to be elucidated. Here, we compared the microbiota of larvae and pupae of Aedes albopictus exposed to different ampicillin concentrations and investigated the bacterial composition of adult females. The results demonstrate that the microbial community differed substantially between developmental stages and that samples of the same stages shared similarities, whereas differences were observed between adult females. Based on all observations, we hypothesize that the use of ampicillin caused dysbiosis rather than excluding bacteria from mosquitoes and that the disturbing effect of ampicillin was obvious in adults. Kyoto Encyclopedia of Genes and Genomes (KEGG) analyses revealed that most of the bacteria identified in this study were significantly associated with metabolism. Taken together, our results indicate that ampicillin can change the abundance of bacteria, while microbial communities of Ae. albopictus showed obvious stage-specific characteristics. Further investigations are needed to characterize specific bacterial components that are affected by ampicillin exposure and to quantify their functions, thereby providing a better understanding of the influence of antibiotics on microbial communities at different life stages.