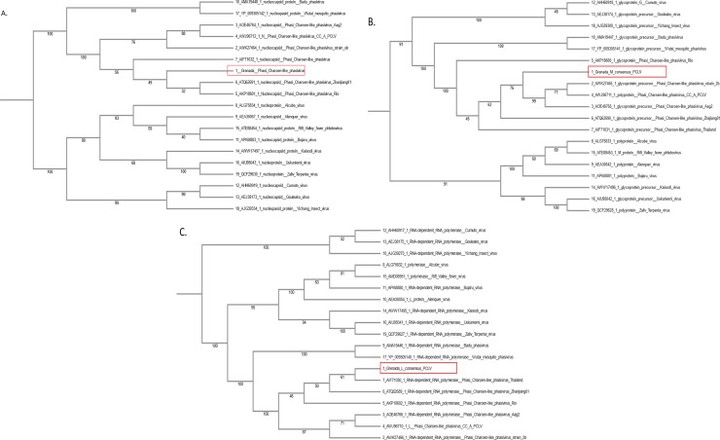 Arboviruses cause diseases of significant global health concerns. Interactions between mosquitoes and their microbiota as well as the important role of this interaction in the mosquito’s capacity to harbor and transmit pathogens have emerged as important fields of research. Aedes aegypti is one of the most abundant mosquitoes in many geographic locations, a vector capable of transmitting a number of arboviruses such as dengue and Zika. Currently, there are few studies on the metavirome of this mosquito particularly in the Americas. This study analyzes the metavirome of A. aegypti from Grenada, a Caribbean nation with tropical weather, abundant A. aegypti, and both endemic and arboviral pathogens transmitted by this mosquito. Between January and December 2018, 1152 mosquitoes were collected from six semi-rural locations near houses in St. George Parish, Grenada, by weekly trapping using BG-Sentinel traps. From these, 300 A. aegypti were selected for analysis. The metavirome was analyzed using the Illumina HiSeq 1500 for deep sequencing. The generation sequencing library construction protocol used was NuGEN Universal RNA with an average read length of 125 bp. Reads were mapped to the A. aegypti assembly. Non-mosquito reads were analyzed using the tools FastViromeExplorer. The NCBI total virus, RNA virus, and eukaryotic virus databases were used as references. The metagenomic comparison analysis showed that the most abundant virus-related reads among all databases and assemblies was Phasi Charoen-like virus. The Phasi Charoen-like virus results are in agreement to other studies in America, Asia and Australia. Further studies using wild-caught mosquitoes is needed to assess the impact of this insect-specific virus on the A. aegypti lifecycle and vector capacity.